Federal Computer-Related Crimes under the Computer Fraud and Abuse Act 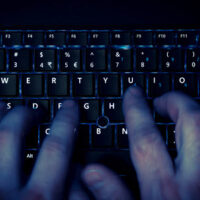 The Computer Fraud and Abuse Act (CFAA) began to take shape in the 1980s as computers became more widely used and susceptible to hacking and other criminal activity, and is now widely used in prosecuting federal crimes involving computers, or “cyber crimes”. The CFAA does not cover every type of illegal activity that can take place using a computer, but works with other laws to protect government computers, bank computers, and computers connected to the internet, from fraudulent and abusive activity.

What activity does the CFAA cover?

It is also a crime to attempt or conspire to commit any of the above acts.  Keep in mind that a conspiracy to break any federal law is its own crime. This means if two or more people agree to hack into a government computer, for example, and one takes an action in furtherance of this plan, the person who did not take the action is still open to conspiracy charges. Further, if the initial actor is successful in completing the hacking, all conspirators can be charged with the actual crime, not just the initial actor.

Similarly, accomplices can be charged for the underlying crimes as well. An accomplice is any person who “counsels, commands, aids or abets, or otherwise acts as an accessory” to criminal activity.

Now that almost every computer is connected to the internet, and most computer activity is done via the internet, engaging in any criminal activity using a computer could open you up to federal criminal charges.

What are the penalties for crimes under the CFAA?

Penalties for crimes under the CFAA range from less than one year for simple trespassing, to a maximum life sentence with a computer-related crime results in a person’s death. Further, the penalties increase significantly when a defendant is convicted of more than one crime under the CFAA. For example, the maximum prison sentence for hacking a government computer is ten years, but increases to twenty when paired with another conviction under the CFAA.

What should you do if you are charged with a federal cyber crime in Florida?

Federal criminal charges are serious, and effective representation is critical. If you or someone you know is charged with a computer related federal crime in the state of Florida, contact an experienced Fort Lauderdale interstate crimes attorney immediately at the office of Bruce L. Udolf, P.A. Call 954-309-0438, fill out the online form, or chat with a live representative to schedule a consultation.