$18 million in cocaine shows up amid bananas given to prison

(CNN)This shipment of bananas donated to the Texas Department of Criminal Justice was ripe for contraband.

On Friday, department officers went to pick up two pallets of donated fruit and quickly discovered something off about the weight of the boxes. “One of the sergeants just noticed one of the boxes didn’t seem quite right,” Jeremy Desel, department spokesperson, told CNN affiliate KTRK. “[He] looked a little further, removed that box off one of the pallets, took a look inside and saw something extraordinarily suspicious.”

Within the boxes, officials discovered 540 packages of cocaine hidden among bundles of bananas. 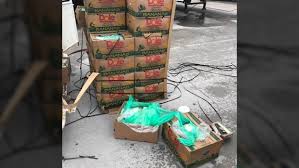 Police list the value of the drugs at almost $18 million. The donation came from Port of America in Freeport, Texas, according to the department, though it’s unclear who or when the cocaine entered the shipment.

“There are several federal entities that are investigating and it’s a pretty significant find for them,” said Desel. The DEA and the US Customs and Border Protection are continuing to investigate, the Texas department said.

This isn’t the first time drug smugglers have tried to use fruit to hide contraband. In 2017, almost two tons of marijuana was disguised as limes in a commercial shipment coming across the Texas-Mexico border. More than 34,000 of the fake fruit packages were discovered by an imaging inspection system and narcotics K-9 team. The drugs are valued at approximately $789,467, according to the US Customs and Border Protection statement.

Two years ago, 2,493 pounds of marijuana were concealed in carrot-shaped packaging entering from Mexico.

CNN’s Melissa Gray and Lauren Leslie contributed to this report.