He’s been studying in the U.S. legally for 7 years. Bank of America froze his account anyway

Saeed Moshfegh woke up earlier this month to discover the strangest thing: Though he had plenty of money in his Bank of America account, he couldn’t access it.

An Iranian getting his Ph.D in physics at the University of Miami, Moshfegh used the account for everyday transactions. All he had to do to maintain the account was show proof of legal residency every six months. 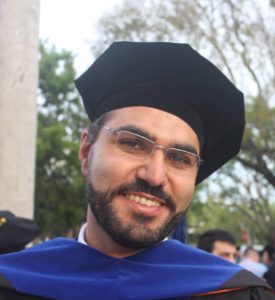 “I think it’s onerous, but I’d been doing it,” said Moshfegh, who has lived in the U.S. for the past seven years. He recently married an American.

That Thursday, Moshfegh went to his local branch near South Miami. He was told that the documentation he had provided could not be accepted. Bank officials insisted he produce a different form, according to Moshfegh. The bank was wrong, he maintains, because the form he had supplied was the correct one based on his current status as a student nearing graduation.

“This bank doesn’t know how the immigration system works, so they didn’t accept my document,” said Moshfegh, 36.

Locked out of his account, Moshfegh couldn’t pay his rent, which was due that week. Credit card payments were suddenly rejected.

His case isn’t unique. In recent months, Bank of America has been accused of freezing or threatening to freeze customers’ accounts after asking about their legal status in the United States. In July, the Kansas City Star reported on a couple who had been locked out of their accounts after Bank of America questioned whether the account holders were U.S. citizens or dual citizens.

According to the Star, Kansas-born Josh Collins received an unusual-looking letter purportedly from the bank asking about his citizenship status. He said he thought the mailer was spam and ignored it—only to have his account frozen a few weeks later.

After Collins’ story was reported, he and his wife received messages from others who had been locked out of their accounts for weeks, the Star reported.

Tennessee native David Lewis says he received the same suspicious-looking letter as Collins. In an interview with the Miami Herald, Lewis said he has maintained an account with Bank of America for about 30 years. In the letter, the bank inquired about his citizenship, income and Social Security number.

When he called Bank of America, he was told his account would be frozen if he did not fill out the forms. That phone conversation led him to cancel his account, he said. “One would think a national bank would be careful about looking stupid after Wells Fargo,” he said, referring to Wells Fargo having been accused of creating millions of unauthorized accounts.

Proof of citizenship is not required to open a bank account in the U.S., according to Stephanie Collins, a spokesperson for the Office of the Comptroller of the Currency, the federal agency that supervises branch banking. Banks are merely required to identify and report suspicious transactions and maintain and update customer information, she said. Banks have not received any new instructions to collect more information about customers.

In response to an inquiries from the Miami Herald, Bank of America spokesperson Carla Molina said she could not comment on specific cases. But she said there had been no change in how Bank of America collects information from customers, including citizenship, in at least a decade. The bank attempts to contact customers before its changes the status of their bank accounts, she said.

Paulina Gonzalez, executive director of the California Reinvestment Coalition, a nonprofit that advocates for low-income communities, told the Herald she disagrees.

“We work with consumer groups and financial counselors in immigrant communities across [California] and the country,” she said in an email. “This is new. We have Bank of America customers who we’ve spoken to who have never been asked this before last year. If they have this asked of them before, they can show us proof.”

In recent months, her group has received several complaints about being asked for proof of citizenship, and almost all have come from Bank of America customers, she said. An article in American Banker magazine also highlighted Bank of America as the one institution specifically facing backlash for its policies.

Spokespersons for Wells Fargo and Citibank both said they may ask about customers’ citizenship to maintain compliance with know-your-customer and anti-money laundering rules. They said no new policies asking for citizenship status have been put in place.

Molina, the Bank of America spokesperson, said the new customer complaints may simply be a response to heightened sensitivities to the debate over immigration in the U.S.

But Gonzalez said the bank’s scrutiny has created a chilling effect in immigrant communities already feeling pressure from the Trump administration’s crackdown on foreign-born residents.

“Fear is gripping these communities,” Gonzalez said. “It’s like walking into a grocery store to buy milk and being asked for your citizenship at checkout—banking is one of the core aspects of daily life in this country. To be faced with this question in order to do banking seems as un-American as you can get.”

Gonzalez’s coalition has now launched a petition, “Tell Bank of America: Stand with immigrants,” that accuses the bank of abetting the Trump administration’s crackdown on immigrants, and calls on the bank to to “protect immigrants’ civil rights and stop collecting information about the citizenship status of its customers.” The petition has received more than 61,000 signatures since Wednesday, Aug. 29.

Dan Hernandez, a Broward County native of Cuban heritage now working as a TV writer in Los Angeles, said he had his business account suspended by Bank of America in December 2016. When he asked why, he was told he was under suspicion of doing business with Cuba. His corporation was called Cuban Missile Inc.—”Cuban Missile” has been his nickname since childhood.

https://www.miamiherald.com/news/business/article217095125.htmlHe eventually Tweeted at the bank’s social media account—and had his situation resolved within 45 minutes. He says he feels lucky that he was able to leverage that platform and his status to get a relatively quick fix, because he is certain others do not have the ability to do so.

“It was extremely scary,” said Hernandez, 34. “I knew I didn’t do anything wrong, but it puts doubt in your mind. A bank can crush your life for arbitrary reasons and never tell you why.”

For Moshfegh, the University of Miami physics student, it was not until he’d had conversations with multiple Bank of America officials that he was able to convince them to let him withdraw all his funds; Bank of America would not let him keep the account.

“It’s not the business of Bank of America to shut down someone’s account,” he said. “Immigration officers are different from Bank of America—with a bank, I would like to feel respect…[and be treated] how they treat other customers. But they treat me as an alien.”