The first quarter of 2018 was relatively slow in terms of enforcement of the Foreign Corrupt Practices Act, with the announcement of only three relatively low-value corporate enforcement actions, as discussed in the previous installment of this article. However, the quarter was above average in terms of FCPA investigations closed without enforcement by the U.S. Department of Justice and U.S. Securities and Exchange Commission.

Specifically, we have counted nine such investigations, involving seven companies, all closed without further action between Jan. 1 and April 1, as set forth in the chart below. Tracking such investigations is necessarily imperfect — companies may elect to never disclose either the initiation or closure of an FCPA investigation. However, available numbers can provide valuable insights into the DOJ’s and SEC’s activities and current enforcement posture.

One likely factor is that the DOJ and SEC are continuing to investigate potential FCPA violations, but have become more selective in the actions they choose to pursue — deciding against enforcement, for example, in cases in which they deem a company’s cooperation and remediation efforts to have been satisfactory.

Indeed, this approach specifically underlies the DOJ’s current enforcement posture. The November 2017 announcement of the DOJ’s FCPA corporate enforcement policy, which continued the DOJ’s prior pilot program, noted that the policy established a “presumption that the company will receive a declination,” absent aggravating circumstances, when the company voluntary self-discloses, cooperates in any subsequent investigation and properly remediates, all as carefully defined by the DOJ.

Notably, however, none of the nine investigations closed during the first quarter of 2018 were official declinations announced under the new FCPA corporate enforcement policy, suggesting that additional factors explaining the uptick in enforcement actions closed without enforcement may be at play. To date, the only true “declination” under the policy has been for the data services company Dun & Bradstreet Corp., which was not prosecuted by the DOJ for its voluntary self-disclosure, but did agree to pay the SEC a $9 million in the second quarter of 2018 — April — for misconduct arising out of the same facts.

Enhanced compliance programs, together with disclosure incentives and cooperation, are a goal that both agencies support, and may reward in specific circumstances. It is difficult, however, to determine whether this connection is real, given the lack of complete public data regarding agency decisions.

Supporting this explanation, it is worth noting that Panasonic Corp. and its subsidiary Panasonic Avionics Corp. announced a combined $280 million settlement with both the DOJ and the SEC, settling alleged violations of the anti-bribery, books-and-records and internal-accounting-controls provisions of the FCPA in April 2018 — which, if it had occurred a month earlier, could have changed the first quarter’s statistics significantly.

Below are some specifics on the investigations closed without enforcement action, in the first quarter of 2018:

We are also aware of another investigation completed by the SEC without further action in the first quarter of 2018, although we cannot report on any details from this investigation.

Notably, two of the companies listed above — Cobalt International Energy and Teradata — first disclosed their investigations in the early months of 2017, making them perhaps the first two FCPA investigations to have been launched and concluded entirely under the current administration.

Investigations Initiated During the First Quarter of 2018 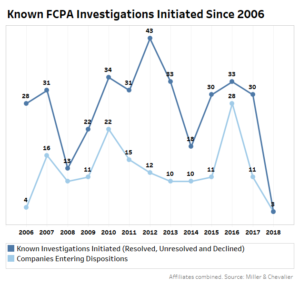 Even if the statistics that we are tracking ultimately show a slowdown in FCPA enforcement under the current administration, it should be remembered that FCPA enforcement risk remains as a significant fact for companies operating abroad. A future administration may return to a more assertive enforcement posture and, under the applicable statute of limitations, companies and individuals may still face liability for their actions for up to five years after the “completion” of any misconduct — with an additional three years in certain circumstances.

Perhaps more important today, enforcement authorities outside the United States continue to increase their enforcement of anticorruption laws against multinational companies and their employees and agents, either under foreign bribery laws enacted pursuant to multilateral conventions, or under domestic corruption laws. Thus, in the current operating environment for many companies, enforcement risk for potential corruption can emerge from many possible sources.By: Collman GriffinJune 6, 2018https://www.law360.com/articles/1050086/fcpa-enforcement-activity-in-early-2018-part-2