Enforcement of the U.S. Foreign Corrupt Practices Act was relatively slow during the first quarter of 2018, with only three fairly low-value corporate enforcement actions announced between January and March of the year. Furthermore, each of these corporate enforcement actions were relatively low-value in terms of the penalties imposed, with penalties ranging from $500,000 to $2 million — significantly lower than some of the blockbuster FCPA settlements of 2017, such as Telia Co. AB ($483 million in penalties paid to the United States), SBM Offshore NV ($238 million) and Keppel Offshore ($105 million in penalties paid to the United States).

This two-part article discusses FCPA trends during the first quarter of 2018. This installment focuses on FCPA corporate and individual enforcement trends. The second installment will focus on trends in FCPA investigations closed during the same quarter.

In the year’s first corporate enforcement action, on March 9, 2018, Israeli holding company Elbit Imaging Ltd. agreed to pay $500,000 to settle FCPA books-and-records and internal-accounting-controls charges by the U.S. Securities and Exchange Commission arising out of the company’s failure to conduct due diligence on two real estate valuation consultants in Romania, whom the company had engaged in connection with efforts to develop shopping and entertainment centers in Central and Eastern Europe.

A few days later, on March 13, the U.S. Department of Justice announced a deferred prosecution agreement with Maryland-based Transport Logistics International Inc., whereby the company agreed to pay $2 million (reduced from $28 million due to inability to pay) to settle charges that it bribed officials at JSC Techsnabexport, also known as TENEX, a subsidiary of Russia’s state-owned nuclear energy corporation Rosatom.

Finally, on March 26, the Canadian mining company Kinross Gold Corporation agreed to pay $950,000 to settle books-and-records and internal-accounting-controls charges by the SEC arising out of its failure to properly implement appropriate controls at mines acquired in Ghana and Mauritania. 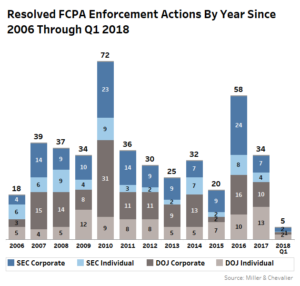 Despite this relatively quiet first quarter, it remains difficult to determine whether the slowdown in announced resolutions in the first quarter is part of a broader trend. Given the vagaries of any individual investigation, FCPA enforcement naturally fluctuates from quarter to quarter and from year to year.

Indeed, the first month of the second quarter saw a combined $280 million settlement by Panasonic Corp. and its subsidiary Panasonic Avionics Corp. with both the DOJ and the SEC, settling alleged violations of the anti-bribery, books-and-records and internal-accounting-controls provisions of the FCPA. According to the disposition documents, employees at the multinational electronics manufacturer’s avionics subsidiary had made improper payments to state-owned airlines and airplane manufacturers to win lucrative contracts for in-flight entertainment systems and global communications services with.

The same month also saw a $9 million settlement between the SEC and commercial data and analytics provider Dun & Bradstreet Corp. to settle books-and-records charges arising out of alleged payments by a Chinese JV to obtain data from government officials.

Furthermore, at least a handful of additional large FCPA-related settlements appear to be on the horizon. Several of these cases have dragged on for years, likely due to their size and complexity. Notably, over the past six months, at least three companies have publicly announced sizable reserves to settle long-running investigations:

In September 2017, the France-based banking and financial services company Société Générale SA disclosed that it had increased its litigation reserve by $300 million in connection with continuing negotiations with U.S. authorities to resolve allegations of improper payments to Libyan government officials, as well as the company’s alleged role in a scheme to manipulate the London Interbank Offered Rate (Libor) rate. (The SocGen disclosure does not indicate how much of this $300 million relates to the alleged FCPA violations.)

In November 2017, Arkansas-based retailer Wal-Mart Stores Inc. announced that it would set aside $283 million for a potential settlement to resolve its six-year investigation into potential FCPA-related violations in Mexico, Brazil, China and elsewhere.

Finally, in February 2017, Germany-based dialysis provider Fresenius Medical Care AG announced a litigation reserve of $200 million for a potential FCPA resolution with the DOJ and SEC.

Accordingly, even despite the slow first quarter of the year, the announced second quarter settlements and the likely future dispositions tied to the announcements noted above suggest that 2018 still may be an active year for FCPA enforcement. 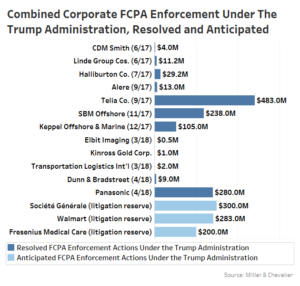 On Jan. 5, 2017, former New Jersey-based real estate broker Joo Hyun “Dennis” Bahn pled guilty to one count of conspiracy to violate, and one count of violating, the anti-bribery provisions of the FCPA. Bahn’s charges arose out of his involvement in the alleged 2014 corruption scheme surrounding the Landmark 72 skyscraper in Hanoi, Vietnam, under which the broker and his father Ban Ki Sang allegedly bribed a fraudster posing as a Qatari agent, Malcolm Harris, in exchange for the promise of Qatari investment in the Landmark 72 skyscraper, in which both Bahn and Ban had a financial interest. The DOJ’s investigation into the Landmark 72 deal has already resulted in an indictment for Ban and a conviction for Harris.

On March 15, 2017, former Siemens executive Eberhard Reichert pled guilty to one count of conspiring to violate the anti-bribery, internal controls and books-and-records provisions of the FCPA and to commit wire fraud. Reichert’s conviction arose out of his time as an executive at Siemens from the mid-nineties to the early 2000s — the same period Siemens was paying bribes to officials in Argentina, Bangladesh, China, Iraq, Nigeria, Russia, Venezuela and Vietnam, resulting in its $800 million penalty in 2008 — still the largest in FCPA history. Reichert is one of the “Siemens 8,” a group of former executives indicted in 2011 for payments made to Argentinian government officials in order for Siemens to win and then retain a $1 billion contract to modernize the country’s national identity card system. Reichert is only the second of the Siemens 8 to be convicted. He avoided apprehension for years, until finally being arrested in Croatia and consenting to extradition to the United States.

In addition to these resolved individual enforcement actions, the quarter’s sole new indictment is of Mark Lambert, a former executive at Transport Logistics International, the Maryland-based nuclear fuel transportation whose deferred prosecution agreement with the DOJ is noted above. Lambert’s indictment, like the DPA for the company he used to head, arises out of allegations that Lambert and two other TLI executives made unlawful payments to officials at TENEX. Lambert’s former co-president Daren Condrey and former TENEX official Vadim Mikerin have previously pled guilty on charges arising of out the same alleged scheme.

During the first quarter of 2018, the DOJ also made public its latest indictments under the ongoing investigation into corruption at the Venezuelan state-owned oil company Petróleos de Venezuela SA, which thus far has resulted in 15 individual DOJ indictments, including several against Florida-based businesspeople. The most recent DOJ charges are against five members of the so-called PDVSA “management team,” all of whom the DOJ considers to be government officials under the FCPA for their roles in an “instrumentality” of a foreign government. All five members of the management team face money laundering charges, but only two of the five — Luis Carlos De Leon Perez and Nervis Gerardo Villalobos Cardenas — face additional FCPA charges for their alleged role in forwarding bribes to other government officials. 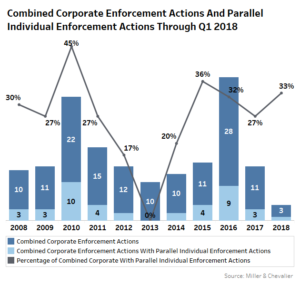 During the first quarter of 2018, however, we were able to ascertain at least nine such investigations closed without enforcement — one of the busiest quarters on record. For additional discussion and analysis of this trend, please see part two of our article tomorrow.